Clouds are an important, remarkable feature of our atmosphere. They redistribute water through precipitation, and they affect the surface temperature of the planet by absorbing, reflecting, and even emitting radiation. The surface temperature at the North Pole can change by several degrees depending on whether or not clouds are present! You might be surprised to learn that it’s actually warmer when there are clouds, because they act as a blanket that traps heat. These effects are important because the Arctic is changing rapidly due to climate change, and feedbacks between clouds and ice may act either to intensify or dampen Artic warming.

Clouds are made up of billions of individual water droplets or ice crystals, and each one of these began as a particle of something other than water. We refer to a group of particles suspended in air as an aerosol, and these aerosol particles are necessary for forming the clouds we see in our atmosphere. But where do they come from and what are they made of?

There are many sorts. In continental regions, a lot of the aerosol is made up of anthropogenic pollutants. Essentially we generate a lot of particles by burning things. Over oceans, sea spray is generated. This aerosol contains sea salt as well as organic compounds. The very northernmost region of our planet, the high Arctic, is a rather special case. Particularly in the summertime, aerosol concentrations here can be so low that there aren’t enough to make clouds. There’s little influence from anthropogenic sources, and sea ice prevents large breaking waves from generating sea spray. So the clouds and climate in this region are very sensitive to small changes in the number of aerosol particles. But with few obvious sources, where do they come from?

The goal of our project was to find this out. We used a custom mass spectrometer that is sensitive to small amounts of aerosol material to identify the processes responsible generating cloud-forming particles in this region. We sampled air all day every day for about two months, collecting and analyzing aerosol particle composition on about a 2- to 4-hour automated cycle. The most fundamental question we are trying to answer is whether the aerosol is formed in the atmosphere out of individual molecules attaching together, or by ejection of solid material directly out of the sea surface. Our preliminary results suggest that both kinds of process are probably important for forming the Arctic aerosol. 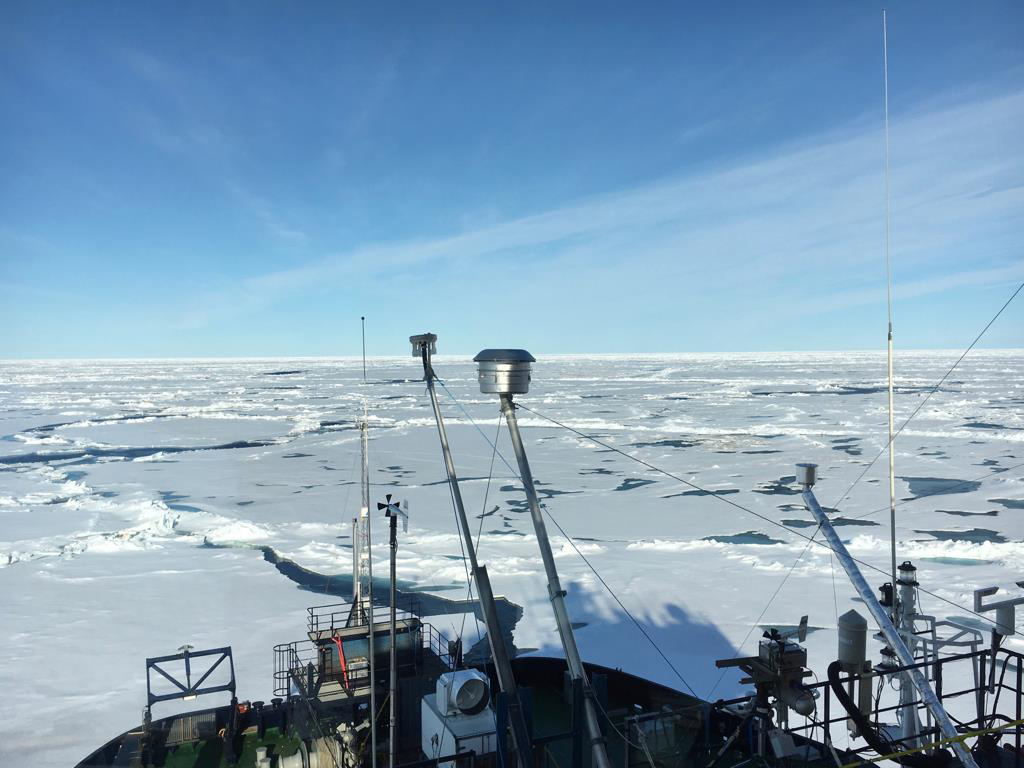 View from the Oden bridge of the bow of the ship and the sampling inlets. For our project, we sampled air from the short, fat cylinder in the center of this image. The air was sucked through the long tube into a lab van where the instrument was housed. The inlets were positioned as high and forward as possible to limit the influence of the ship on the sampled air. Photo: Michael Lawler

This project was funded by the U.S. National Science Foundation, Office of Polar Programs. Logistics support was provided by the Swedish Polar Research Secretariat.