Looking for traces from the ice sheet 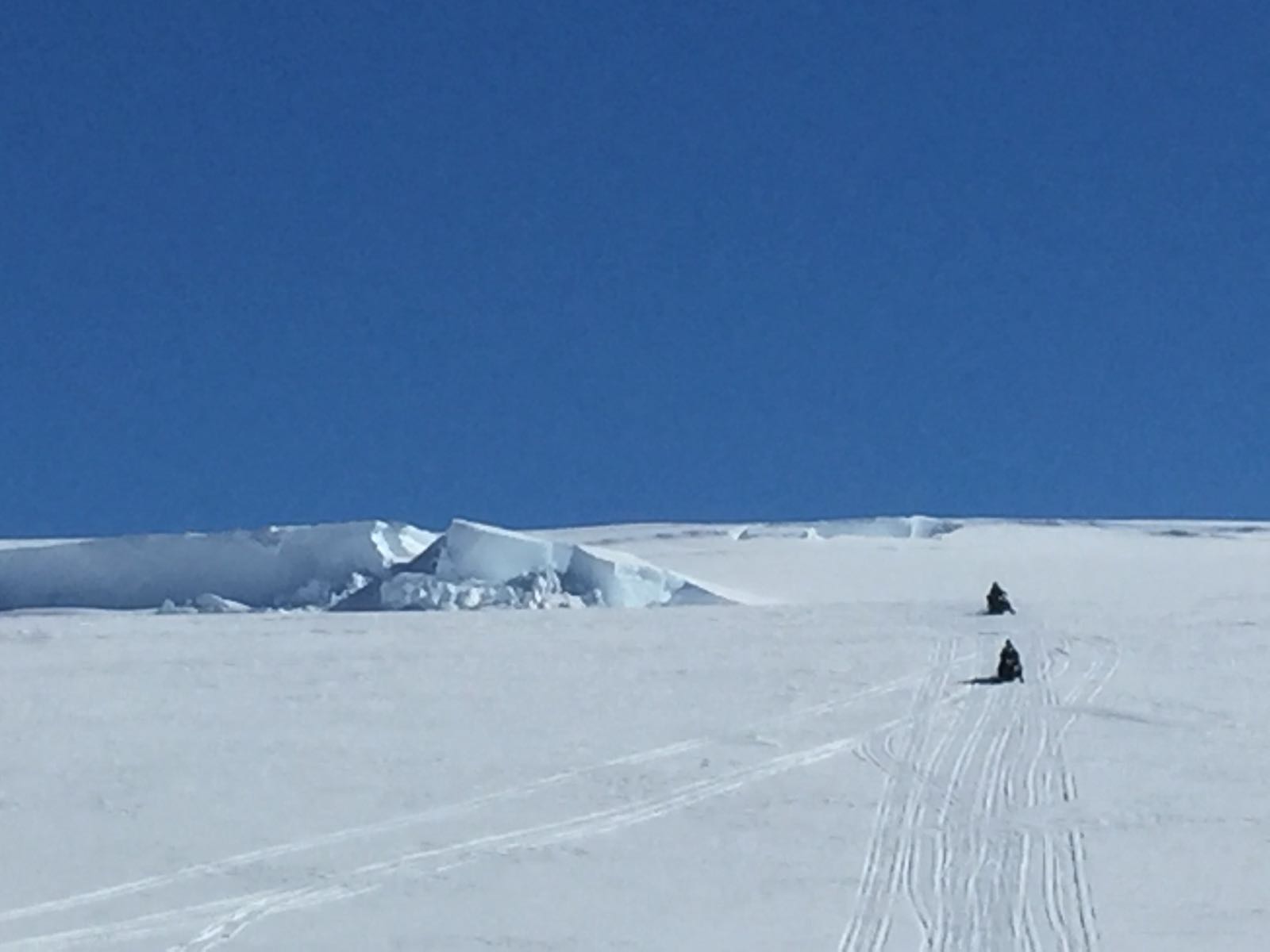 Yesterday we drove our snowmobiles up to the Høgskavlen Mountain, 2 256 m above sea level, and 850 meters higher than the location of our camp. Høgskavlen is a glacier-covered plateau lined with small mountain ridges. The way up (and down) went over rolling glaciers and past blueish icefalls. At the top it was completely windless and not a cloud in sight! We had a fantastic view north towards the Borg Massif, and to the west we could see the Schytt Glacier, the great ice stream named after Valter Schytt, the glaciologist for the Norwegian-British-Swedish Antarctic Expedition 1949–1952, and founder of Tarfala Research Station at the foot of the Kebnekaise massif in northern Sweden. 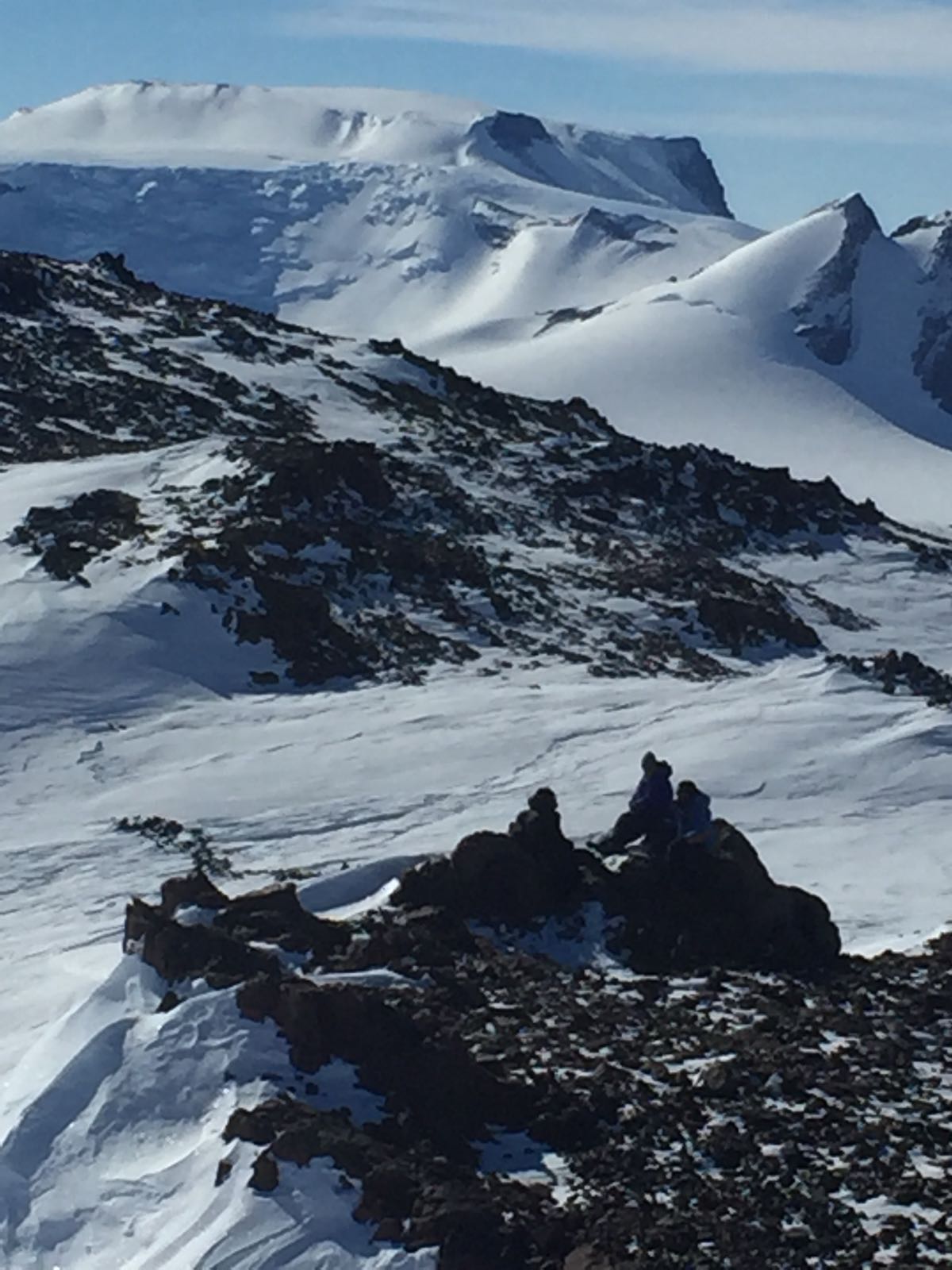 Our mission at this elevated position was to look for clues that the ice sheet have been thicker. We are searching for rocks sticking out of the ice and examine them for traces of ice – scratches or grooves that indicate that the ice sheet has once passed over the rocks. If we find such traces, the researchers collect a small sample of the rock to analyse the chemical properties in a laboratory at home. The results can give us a date for when the ice disappeared. 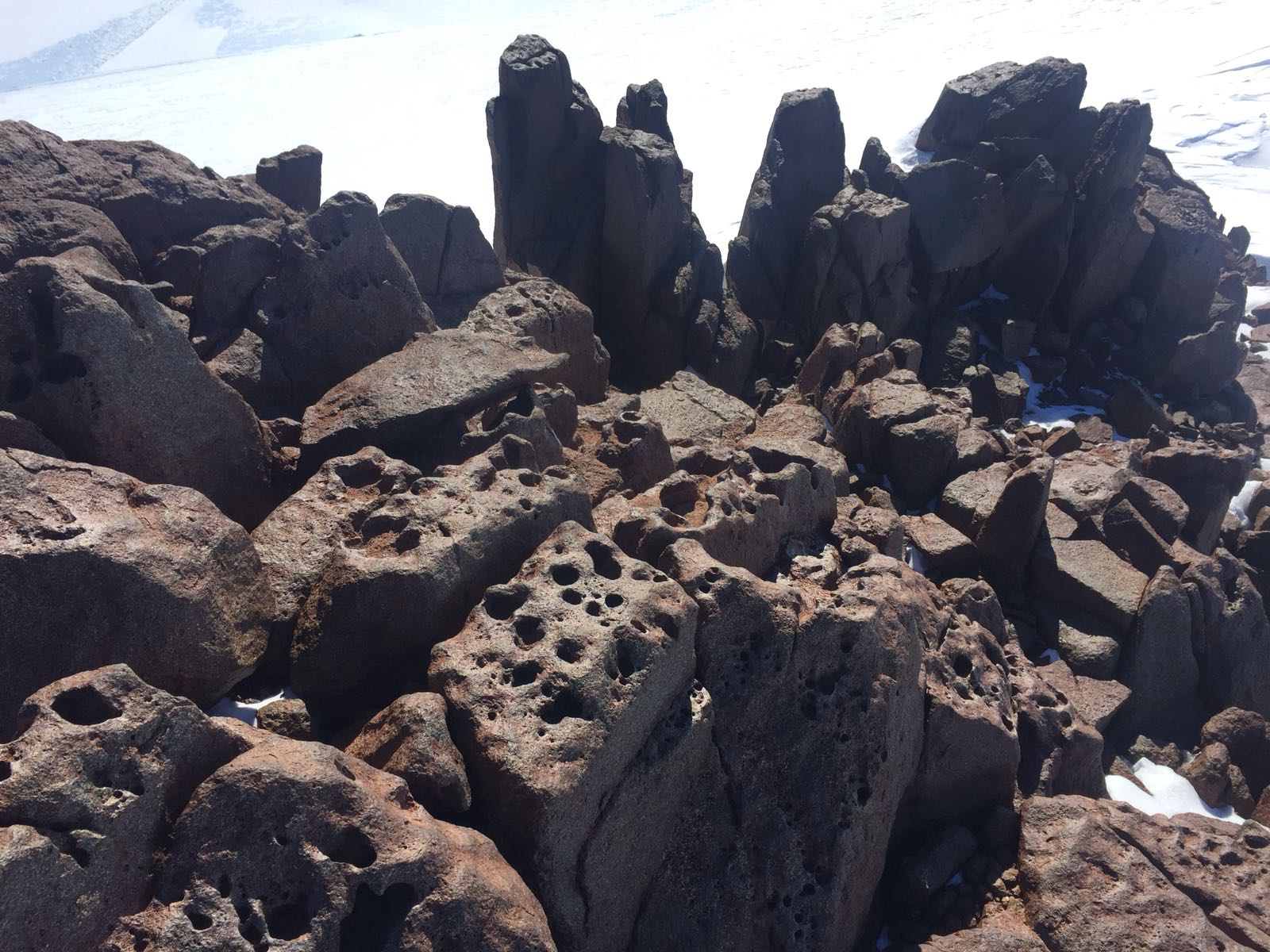 The rocks at the top show no visible signs that the ice sheet has ever reached so high – everything is rusty brown and crumbled. Further on, we find clear traces of the ice’s presence. Here the researchers collect two samples. The samples contain quartz, which in turn contains small amounts of radioactive isotopes. These are formed in a chemical reaction when cosmic radiation, small particles from space that constantly bombard the earth, hit the atoms inside the rock. By measuring these radioactive isotopes, the researchers can tell for how long the rock has been exposed to cosmic radiation and thus been ice free. 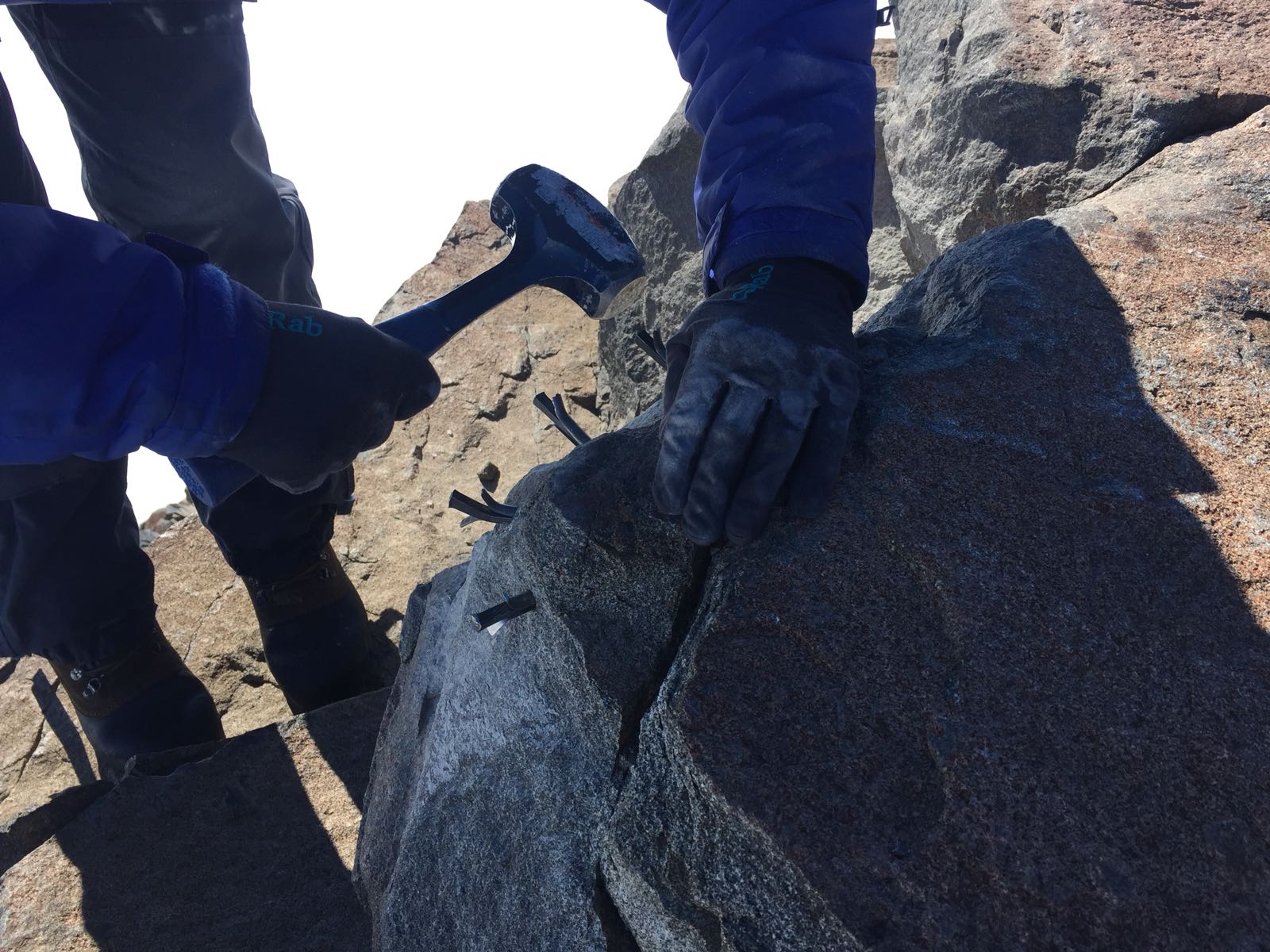 This is what the field work is all about, looking for traces of a thicker ice sheet. Where we find these traces, the researchers collect samples. The result of our efforts will then become small puzzle pieces in a larger effort to test and improve ice sheet modeling. Our contribution is to provide actual data to see how well the model matches reality.

The aim of the research project is thus to improve knowledge of what happens to the East Antarctic Ice Sheet as the climate changes. The ice sheet covers an entire continent. In several locations it is more than three kilometers thick. If only a small part of this giant ice mass would melt, it would be enough to increase the sea level several meters. As the climate of the earth is slowly getting warmer, it is important to know how much the ice sheet can change and how fast it could happen.

Ultimately, one can say that our project contributes to knowledge that is crucial to the prosperity and survival of humanity. It’s a beautiful and warm thought when you sit on the snowmobile with freezing toes. 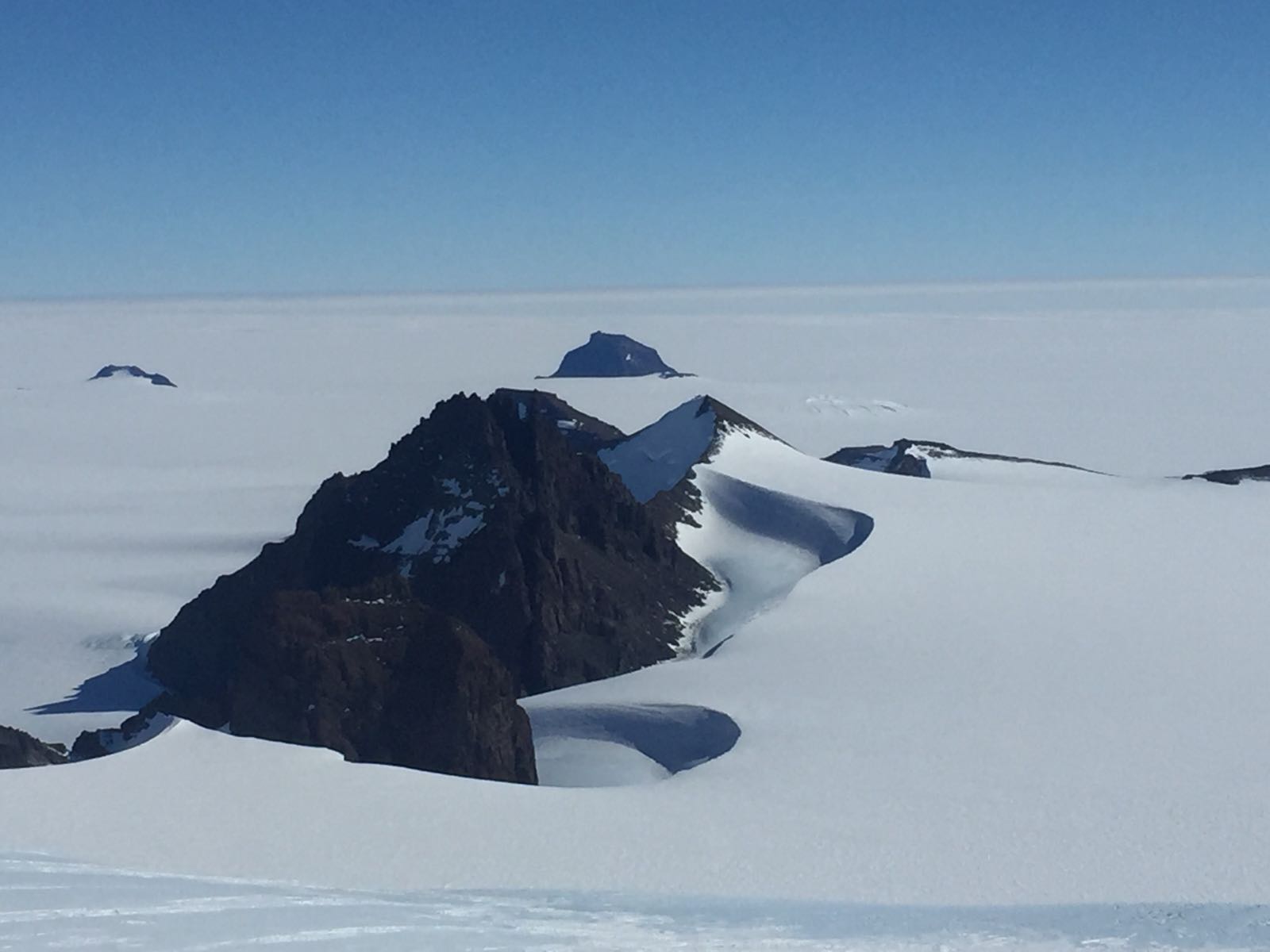